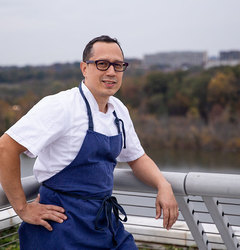 Jean-George Vongerichten’s threestar Vong, and Gertude’s along side Chef Laurant Manrique, before landing at the iconic Russian Tea Room as executive sous chef. In 2001, Montes de Oca became the chef of

Michael Ware
Roof Terrace Restaurant Director
Born and raised in Washington DC, Michael Ware graduated from University of Maryland – College Park. He started his hospitality career early in his teenage years. Working in the Food & Beverage industry for different hotel brands and lifestyle brands alike. Michael has worked every department in Food & Beverage eventually working his way up to his first General Manager job at 23 years of age at the upscale modern lifestyle brand “STK” in Washington DC.
In 2012 He started his apprenticeship to become a sommelier. After obtaining his Level 2 Certification in 2016, He since has been involved in creating wine list for Kimpton Hotels & Restaurants and other IHG brands.
Throughout his tenure he has had the opportunities to work with some great culinary minds such as Art Smith, Kawame Onwuachi , and Jennifer Nguyen.

Sally Silverman received her Associate’s Degree in culinary arts, and bachelor’s degree in 2012 hospitality management from State University of New York at Delhi . She has worked at private country clubs and resorts in Michigan, Florida and New Hampshire. After moving to D.C., Sally continued her professional career at The Cosmos Club, and most recently as Executive Sous Chef at The Sunset Room by Wolfgang Puck.

Riley Dwonzyk grew up in Southern Maryland and earned his Culinary Arts degree from the Culinary Institute of America. During his time at the CIA Riley worked for Restaurant Associates at the student commons dining center of campus called the Egg. Riley was then offered a position at the Natural History museum in DC as a manager in training, and then was offered a position of Sous Chef at the US Senate. Riley’s passions include working on cars, motorsports, traveling to new cities.